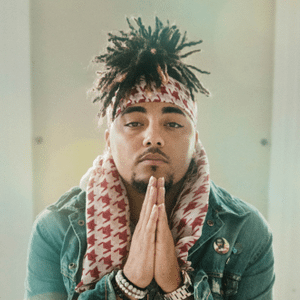 For the last five years and some change, Steven Malcolm has pounded the pavement with razor sharp focus to deliver some of the most infectious and unmistakable hip-hop beats of his generation. Thus far, the rapper’s innovative musical pursuits have landed him in the studio for the self-released Monsters Ink, regional recognition all around Grand Rapids, touring time with Grammy-winner Lecrae, additional performances alongside game-changers KB, Andy Mineo, Da T.R.U.T.H., This’I, Swoope, Json and Canton Jones (to name but a few), a slew of massive festival appearances, features alongside KB and Hollyn, plus “Best New Artist” and “Best Free Project” nominations from Rapzilla.com.

Throughout it all, Malcolm also accumulated an insane army of appreciators on social media and turned YouTube upside down with his groundbreaking videos, which made it only natural for record labels to come calling and the offers to start piling up. Although he could’ve went practically any route he wanted, the rising star settled on Word Records (also the home of eclectic hit makers Group 1 Crew, Skillet, Switchfoot Needtobreathe, for KING & COUNTRY, Chris August and Family Force 5) for his self-titled debut, thanks to a shared vision for spreading his pioneering and thought-provoking music to the masses.

Much like any of the aforementioned or mainstream trendsetters such as Common, J. Cole and Sir The Baptist, the album overflows with an authentic approach to songwriting that is just as socially relevant as it is spiritually conscious and unflinchingly personal. And considering Malcolm’s rocky road prior to finding fame, paired with a newfound confidence from faith, this self-titled major label debut sounds like the ultimate soundtrack to a life that was always destined to deliver the real deal.

“In high school I was a basketball player and my goal in life at the time was to be in the NBA,” Steven says of the winding road that eventually pointed towards rap and hip-hop. “But going into my freshman year of college, stuff just really hit the fan and life really smacked me across the face. My family was going through hard times and then I started having an identity crisis where I was looking at life and wondering ‘what am I here for?’ My grades were horrible that year, so I couldn’t play ball, my best friend and I fell out and my mom ended up moving, so I was really lost.”

Steven continues, “One day a friend of mine, who I played basketball with in high school, invited me to this church, but other than believing in God in a very general sense growing up, I’d never stepped foot in a church before. Now I’m thinking I’m going to have to pick up my pants, it’s going to be boring and nobody’s going to speak my language, but then he told me it was a hip-hop church, and since I had nothing to do that night, I thought ‘okay, sure, why not?’ And it was like a breath of fresh air that just smacked me in the face.”

Rather than cracking open the old school hymnal and sitting solemnly in a pew, Steven was magnetically attracted to a vibe that more closely resembled a club, but with a completely different mindset. “I’m looking around and I see guys that look just like me, they talk just like me and they were so happy and joyful,” he recalls. “These guys were up there rapping and dancing for Jesus, and I’m like ‘I never knew this even existed!’ I was the type where I never knew you could use anything to glorify God and they’re up there using lyrics and it just blew me away!”

In fact, Steven became so attracted to not only the scene, but also its redemptive ethos that he kept going back, eventually leaving behind his life of womanizing and endless parties to tapping into a previously dormant but no doubt God-given talent. It turns out that Steven’s second passion beyond basketball was always music, but it rarely went beyond cutting random tracks just for kicks in his college studio between a steady stream of girls, friends, video games, going out and spinning some Kanye.

“People kind of knew that I rapped a little bit, but I really wanted my focus to be on my faith and I really wanted to have a solid foundation, so I took a year of learning the Scriptures and really getting grounded,” he explains. “Once that all got settled, somebody asked me what I thought about serving the church as part of the worship team, and dude, the feeling of being on stage and having people engage with God became everything to me. It finally felt like my purpose in life.”

Though he continues that role at The Edge Urban Fellowship to this very day, it was only a matter of time before he branched out beyond those four walls with such a relatable story of starting anew. Of course, Monsters Ink may have first touched on that entire tale, but Steven Malcolm is the latest compelling chapter in the empowering saga, which its namesake crafted using a careful commitment to his beliefs, coupled with creative appeal for literally anyone with an affinity for rap, hip-hop, reggae and pop.

“This is me telling my story because the best way to reach somebody is to relate to them,” he suggests. “We’ve all lived life, we’ve all had good times, we’ve all had bad times, we’ve all had struggles and triumphs, trials and tribulations. The things I’m saying and the stuff I’ve gone through can relate to anybody. And musically, you just gotta make that stuff thump bro. Everything about it musically just has to understand what’s poppin’ and what’s happening in the culture of hip-hop right now. I love trap music, I love East Coast hip-hop boom bap music, I love Southern Atlanta music and I love radio music. I also listen to reggae ‘cause I’m Jamaican. I love it because the foundation of reggae music is all about unity, peace and love. It’s just knowing what’s relevant and really going in and just killing it.”

The evidence comes throughout virtually every shift in style throughout Steven Malcolm, starting with the lead single “Hot Boy,” an immediate anthem destined to light up the charts as quite possibly this year’s answer to Fetty Wap’s instant cultural cornerstone “Trap Queen” (or if Steven has his way, anything Travis Scott ever touched). “It’s funny ‘cause I had a girl ask me what’s a ‘Hot Boy?’ when we were in the studio,” he remembers. “And basically what I want people to take home is whatever you’re passionate about, whatever it is that you do, there has to be a burning hot passion inside of your heart to really excel and be the best that God has created you to be. I feel like if God has given you a gift and you’re just using it in a mediocre way or giving mediocre potential to it, it’s a waste of that talent. There has to be a fire in your heart to really excel and be the best you can be at it.”

Other standouts include “Cereal,” easily the most comical, catchy and completely autobiographical ode to Captain Crunch and company since alternative rockers the Newsboys served “Breakfast,” along with the uplifting “Never Let You Go,” a collaboration with former Group 1 Crew member turned soulful solo star Blanca. Though most of the tracks are recorded solo under the direction of all-star production duo Cobra (Joseph Prielozny and Dirty Rice), Steven is also quick to give a shout out to Hollyn and Andy Mineo, who are both guests on one of his favorites. “Another track that’s super dope is ‘Party In The Hills’ and it’s gonna be big because it’s a super energetic West Coast track,” he asserts of the latter triple team. “We should be thankful for even waking up everyday, but also always set out to accomplish our goals and really go hard to the point where we start seeing the fruit.”

Considering this is all coming from a guy who lost the plot on his own life not that long ago, the songs throughout Steven Malcolm go well beyond merely accomplishing that mission, but also have the ability to motivate absolutely anyone to make whatever changes are needed in their own lives. “Here is my vision of what I want to do with music and with Steven Malcolm,” the rapper sums up with eyes firmly locked on the arenas he’s about to slay on the 2016/17 edition of the Winter Jam Tour. “As blunt as this may sound, I want to be the best Christian rapper. The first Christian rapper I ever heard was Lecrae and I want to be that for my next generation. I want to be somebody like ‘dude, I gave my life to Christ because I heard a Steven Malcolm track and he’s the first Christian rapper I ever heard.’ I know I have it in me and I know that God has put it in me to really excel. My work ethic is crazy, I’m just so determined and I’ve got a great team behind me with Word. I had the wheels to go and now I finally have the platform to help take it further.”

When it comes to Steven Malcolm’s artistic ascent and subsequent potential for impact, skies are the limit, and no matter the final destination, you can bet it’s gonna be hot boy.