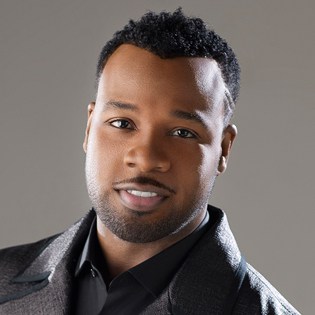 VaShawn Mitchell was born and raised in Chicago, IL, a city known as the birthplace of Gospel music, an art form that has been indelibly imprinted on his life. When he was a teenager, Mitchell became the assistant music director of St. Mark Baptist Church. Then for nearly a decade he went on to serve as Minister of Music at Bishop Larry D. Trotter’s Sweet Holy Spirit Church. As the youngest Minister of Music in that church’s history, Mitchell successfully merged the contemporary themes he composed with the traditional choir vibe that marked the church’s worship services.

Throughout the years, VaShawn’s artistic vision has grown, shaping him into a mature worship leader and a recognized Gospel songwriter. In 2010, his passion and talent for songwriting, producing and singing led him to to release Triumphant which became his best selling album to date. Soaring to the top of the charts with his mega-hit single “Nobody Greater,” Mitchell amassed numerous awards and nominations. In 2011, he received 11 Stellar Award nominations (the most received by any artist that year) and took home 6 trophies. He also earned two GRAMMY® Award Nominations and two GMA Dove Award nominations for both the single and the album. Billboard magazine declared “Nobody Greater” the #1 Most Played Gospel Song of 2011 and Mitchell was named Billboard’s #1 Gospel Radio Artist of 2011 and Triumphant was among the Top 5 Gospel Albums of 2011. The single held the #1 position for nine consecutive weeks on Billboard’s Hot Gospel Songs chart and crossed-over to the Urban Contemporary Adult charts.

Mitchell continues to expand interests in community service and philanthropy. He is currently the National Faith Based Spokesperson for the Big Brothers Big Sister organization and recently started the Norman Youth & Arts Foundation, named in memory of his grandfather. Mitchell has performed for the NAACP as well as partnered corporately with Denny’s on several health care initiatives.

VaShawn was honored by his hometown of Harvey, IL when they named the street where he grew up “VaShawn Mitchell Street.” He believes that he is a role model for young people, and that it is part of his calling. It’s a role that he is both proud and happy to take on.