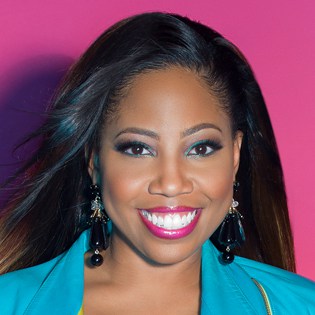 Janice Gaines already has Mary Mary’s Erica Campbell, Donnie McClurkin, Natalie Grant and Donald Lawrence co-signing her skills. That says quite a lot. But even without these mega-talents in her corner, Gaines is guaranteed to hook you from the very first listen.

Gifted with an effervescent soprano that soars into the rafters and an ear for soul-baring lyrics, Gaines is Motown Gospel’s next-generation game changer. Her refreshing yet fearless artistry—a daring fusion of mainstream and inspiration —reverberates with jubilant determination.

“Just because you love Jesus, you don’t have to put yourself in a box,” declares the former seventh grade math teacher who’s also a fan of top 40 radio, urban AC and love songs. “It’s not the easiest life to be a Christian in today’s culture, but I’ve found different ways to deliver life-changing messages through an urban pop sound and lyrics that explain my heart. Is it a risk? Absolutely. But at the end of the day, I can only truly be me.”

Gaines spells out her mission to full effect on “Love,” the autobiographical track that opens her debut album Greatest Life Ever. Against a spare piano- and drum-centric groove, she disarmingly relates, “There was something missing till the day that it hit me … / God is love / That was my change … / It was love that got me here / So strong / I ain’t got no fears / That’s my story. Enjoy the ride.”

And what a ride it is. Over the course of seven more tracks, Gaines whisks listeners away on a whirlwind tour of what it feels like to be in God’s grace. She takes the anthem route on the atmospheric “Wait on You,” unabashedly proclaiming she’ll never let go of believing in all that He promises—no matter how long the wait. Built on a platform of up-tempo beats, “The Break-Up Song” (with special guest Eric Dawkins) bumps the adage “You only reap what you sow” up a notch, engagingly imploring listeners to step it up and make room to hear what God is saying. Drawing from a soulful pop palate, title track “Greatest Life Ever” celebrates the fact that everything you’ve ever heard about God is undeniably true.

For her first Motown Gospel album, Gaines collaborated with one of her “dream producers,” LaShawn Daniels. The Grammy-winning songwriter/producer behind such acts as Michael Jackson, Whitney Houston, Destiny’s Child and Tamar Braxton proved to be a kindred Christian spirit.

“Right away I thought, ‘Here’s someone I can lend my gifts to and who can take me where I can go,’” recalls Gaines of the duo’s chicken nugget-filled late-night writing and recording sessions. “It was less work and more fun. It just became two friends making music like we’ve known each other for years.”

Born in St. Louis and raised in Memphis, Gaines comes by her musical dichotomy naturally. Although her Methodist minister father and singer/songwriter/musician mother divorced during her childhood, Gaines describes herself as “a combo“ of the two. “I grew up with a conservative dad, whose favorite songs are hymns, and a creative, eccentric mom who listened to everything from Earth, Wind & Fire to Tupac.” In fact, Gaines and her older brother frequently traveled with their mother to her gigs as a singer in a top 40 cover band.

Also influenced early on by versatile gospel-bred singers like Whitney Houston, Aretha Franklin, Patti LaBelle and Gladys Knight, Gaines performed her first solo in church at age 12. And that experience taught her a valuable lesson. “I learned then that you have to engage people so they know and care what you’re singing about.”

After starting a girl group with friends in high school and performing in a professional gospel choir, Gaines attended Oberlin College in Ohio, where she kept her hand in music (singing background for Howard Hewett) while pursuing a degree in economics. Immediately thereafter, she attended Ohio’s Ashland Theological Seminary and earned a second degree, Master of Divinity. Post-graduation, she moved to New York and began teaching seventh grade math in the Bronx. But when a friend asked her to read a first draft of a beginner’s guide to the gospel music industry, Gaines rediscovered her true calling.

“I came out of that experience knowing I couldn’t be afraid anymore,” says Gaines. “I had to pursue what He put in me.”

Relocating to Nashville, she—with the help of manager/husband E.J. Gaines—jumped into the local background session scene. But it still wasn’t enough. “I needed to pause,” she explains, “and ask myself, ‘What’s in Janice to sing?’”

Teaming with a local producer, Gaines put on a showcase that caught the attention of Motown Gospel president Ken Pennell. As did a song that Gaines recorded in 2012, “One Day.” Sharing her sensitive perspective on how to move forward after the death of a loved one, Gaines says, “I began coming into my own with that song.” The track’s ensuing fan buzz prompted Motown to sign her.

“The best thing I have to feed people,” says Gaines, “is what has fed me the most: what God has said to me through the Bible and personal experience. My goal is simply to make music that will have you feeling good from the start. Then you’re hooked.”