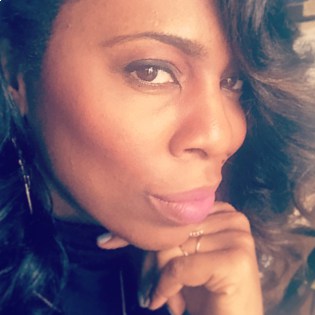 Eboni Funderburk is a 17-year Gospel industry veteran. A Mass Media Arts graduate of Hampton University, Grimes got her start in 1998 as Assistant Editor of Gospel Today Magazine, and Managing Editor of Gospel Industry Today Magazine.  In 1999, wanting to break into the music industry, she accepted a position as intern at then Verity Records, and shortly afterwards was brought on staff full-time in the radio promotions department.  During her tenure at Verity, she was part of a three-member team responsible for working Gospel hits by artists such as Pastor Donnie McClurkin (“We Fall Down”), Bishop Hezekiah Walker & Love Fellowship Choir (“I Need You To Survive”), Fred Hammond, John P Kee, Vickie Winans, Tonex and many more!

In 2004, after five years at Verity Records, Grimes was recruited to head-up the radio promotions department at EMI Gospel where she was solely responsible for breaking records at Gospel radio; including hits from artists Kierra “KiKi” Sheard (“You Don’t Know”), Smokie Norful, LaShun Pace, Bishop Eddie L Long & New Birth Total Praise Choir (“Suddenly”), Micah Stampley (“Take My Life: Holiness”) and Donald Lawrence & The Tri-City Singers, whose then #1 single “The Blessing Of Abraham” remained at the top of the charts for a whopping 18 consecutive weeks.

Recognizing her amazing success at radio while at EMI Gospel, in 2007 she was recruited to rejoin the promotions department of then Zomba Gospel (formerly Verity Records) as Sr. Director of National Promotions.  As a key member of the promotions team, she was responsible for working records from artists like Kirk Franklin, Byron Cage, J Moss, Dorinda Clark-Cole, 21:03, Fred Hammond, Hezekiah Walker, and the hugely successful break-out record of 2007 and 2008 “Never Would Have Made It” by Pastor Marvin L. Sapp which stayed a total of 79 weeks on the R&R Gospel Chart, and #1 for a record 52 weeks ~the longest running #1 single in the HISTORY of the radio ALL FORMATS.

In August of 2008, Funderburk resigned from her duties at Zomba Gospel to launch her own independent promotions company, EFG Radio Promotions & Consulting that specializes in supplemental Gospel radio promotions for major labels, as well as up-and-coming independent Gospel artists. Funderburk credits her successful career to her strong knowledge of the industry, exceptional reputation, high standard of excellence, integrity and passion for Gospel music, its message and the millions of lives it impacts daily.

Since the Gospel Radio Spins & Audience Charts’ conception in 2004, Grimes has had nine (9) #1 singles including her recent hit “Worth Fighting For” Brian Courtney Wilson and breakout record “Nobody Greater” VaShawn Mitchell, just over fifty (50) top ten singles, and has been a part of making history with Marvin Sapp.  She has been nominated for Radio & Records Gospel Promotions Executive of the Year for three consecutive years (2006, 2007, 2008), clinching the title in 2007, and has been recognized for her contributions to the Gospel industry.

“I am honored to be counted amongst the few who get to do what they love everyday,” says Funderburk.  “If someone would have told me seventeen years ago that I would be here, with my own business, working with the caliber of artists I get to work with everyday, and ultimately contributing to ministries that are literally impacting the world, I would have laughed it off—not really being able to conceive that this would be me!  But I am truly in amazed that I get to say this is what I do and I am proud of what I have been blessed to accomplish over the years.”