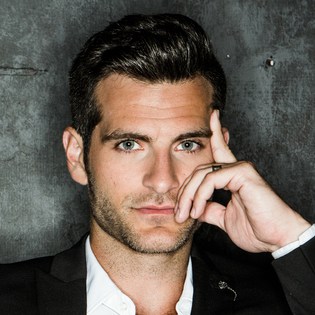 Alan Powell is a founding member of the pop group Anthem Lights, as well as a critically acclaimed actor. Variety called his performance in the 2014 indie film THE SONG “excellent” and The Hollywood Reporter called him a “heartthrob.”

A versatile entertainer, Alan is a breakout star that is turning heads in both the music and film industries. Despite his God-given talent, Alan did not originally set his sights on a career in entertainment.

Born a pastor’s son, Alan began his freshman year at Liberty University with the goal of becoming a New Testament professor. Alan excelled in Philosophy and Greek studies, and for a time could speak proficiently in Greek.

But a chance entry in a university talent show dramatically changed the course of his life forever. As a skilled musician and surprisingly gifted hip-hop dancer, Alan blew the crowd away with his performance of a Michael Jackson mash-up. After, a friend emphatically insisted that Alan capitalize on his unique talents – and with a “now-or-never “ philosophy, Alan moved with his young wife to LA in 2006 to pursue music.

In L.A., Alan connected with Chad Graham, a longtime friend from high school and the two decided to start a Christian band. They invited Kyle Kupecky and Caleb Grimm, friends from their college days, to round out the group, and in 2007 the band Yellow Cavalier was born.

Over the next five years Alan and the band continued to evolve and grow their fan base. In 2010 they signed with Reunion Records, changed the band’s name to Anthem Lights, toured across the country, and recorded two studio albums: Anthem Lights and You Have My Heart. Both albums showcased Alan’s skillful songwriting. In 2012, the band parted ways with Reunion Records to create their own record label named YC Records as a throwback to the band’s “Yellow Cavalier” origins. They also brought on new band member Joey Stamper to replace Kyle, who amicably left the group to pursue a solo career in music.

Alan focused on writing and producing quality music and creating music videos with entertaining and engaging content. He honed in on the band’s inherent skill at creating an upbeat, pop music sound, and continued to steer Anthem Lights and its music toward the mainstream pop genre. And fans responded—in droves.

Anthem Lights now has over 260,000 YouTube channel subscribers and over 40 million hits, and is taking the pop music scene by storm.