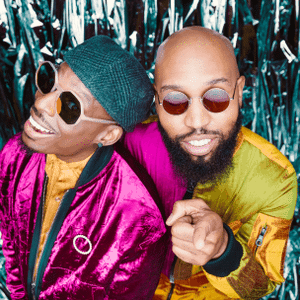 Claude Kelly was born and raised in the heart of New York City where he was exposed to music at an early age. He went on to study at the Berklee School of Music in Boston, receiving a degree in music business and management. He parlayed his knowledge of the business and love for music into a successful career, which was jump started when he found himself in the studio with Akon and Whitney Houston. From there he’s written hit singles for Britney Spears, Miley Cyrus, Jessie J, Bruno Mars and countless others. Today he’s standing behind the mic as the vocal element of Louis York. He and Chuck Harmony, the other half of Louis York, also founded the music collective, Weirdo Workshop, in 2014.

Chuck Harmony spent his formative years in East St. Louis amongst a rich tapestry of gospel music. Those surroundings created a passion for rhythm at a very young age. He quickly discovered a natural ability to master an instrument with very little instruction. Over the course of his career, he’s managed to teach himself to play dozens, which served as a natural transition into production. As a producer, he’s worked with artists like Celine Dion, Mary J. Blige, Jennifer Hudson, Janet Jackson, John Legend, Rihanna and Ne-Yo. Unable to contain his youthful lust to create music, he found himself producing his own music with Claude Kelly. The two formed the group Louis York and also went on to found the music collective, Weirdo Workshop, in 2014.