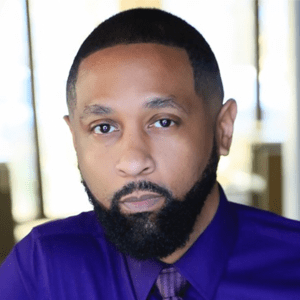 New York City native, Damon Williams, is an entertainment marketing executive, specializing in faith-based multi-media, with a twenty-year tenure in the Gospel Music industry. Williams has spent the last two decades molding and shaping the careers of Gospel luminaries such as Kirk Franklin, Marvin Sapp, Fred Hammond, Shirley Caesar, Yolanda Adams, Hezekiah Walker, Trin-i-Tee 5:7, and many others.  By devising and implementing the marketing campaigns through which the general public would be introduced to, and engaged with, each artist, and by meticulously overseeing every photo and video shoot, Williams has always taken great pride and responsibility in crafting each artist’s image, or their “brand.” He made it a priority to assure his projects exemplified the professionalism, style, and sophistication befitting the caliber of such mighty messengers. Williams remained vigilant in insisting that the presentation of each brand he represented remained comparable, if not superior, to the quality of that from any other genre.  Williams’ creative direction has been heralded industry-wide and many of his projects have received the coveted Stellar Award for Best Recorded Album Packaging, with even more receiving nominations.

During a stint in Atlanta, GA, Williams formed DAMON ! WILLIAMS MARKETING, an independent marketing consultancy that would extend his marketing experience into the arenas of film, television, and theater.  During this time, he implemented strategic experiential marketing campaigns for various networks, film production companies, and theater companies, including Oxygen (“Preachers of LA,” “Preachers of Detroit”), Fox Searchlight Pictures (12 Years A Slave and Black Nativity), HBO (“Game of Thrones”), and The Alliance Theater (BeBe Winans’ Born for This).  Broadening into these other multi-mediums has vastly enhanced his tactical, experiential, and viral marketing experience, and afforded him with a depth of knowledge that he could bring back to his first love; music.

Williams has recently relocated to Nashville, TN to join industry leader, RCA Inspiration, as VP of Marketing. There, he oversees the marketing strategies and implementation for artists such as Travis Greene, The Walls Group, Donald Lawrence, Israel Houghton, and others.

Williams is also passionate about travel, food, health and fitness, mentoring youth, the arts, and writing. He has also been published in various industry trade publications, including Gospel Today, Gospel Industry Today, Urban Network, and LA Focus, and on blogs including GospelPundit.com and EURweb.

His career has predominantly involved providing information and awareness about a myriad of products, projects, and objectives that positively enhance the lives of designated audiences and demographics, from an inspirational, social, or recreational standpoint.