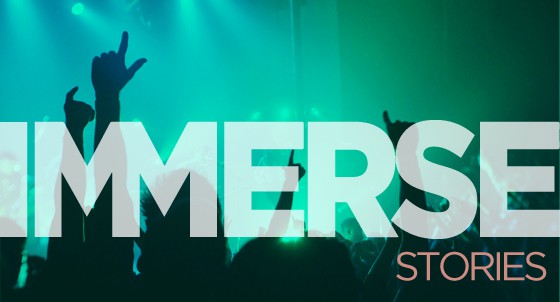 To tell you the truth, my IMMERSE experience started out a little shaky.

As a 49 year old mother of four and homemaker, becoming a singer, guitarist and songwriter has been progressing at a snail’s pace. But I ramped up my efforts and worked hard to write, video record and enter my songs and my vocal auditions into the competition segment of IMMERSE, only to be discouraged by the judges’ not-so-positive remarks. I did advance to the competition in a vocal entry, but literally choked in the live audition on the most important and climactic note. But the day was not over yet and that evening I was first in line for the open mic, and I performed for one of the first times in my life, a song I had written about me and God. (Bucket list item: Check.) A few young guys really “dug” my use of blues chords and I started to find a few friends. End of day one: a little homesick, pretty unsure of myself, but still curious about what I might learn tomorrow.

I chose a session on song writing, which was hilarious and insightful, a talk on branding which inspired me to think about how I present myself to the world even at the grocery store, and then I went to a lunch where publishers and other industry professional would play and then critique our recorded songs. I would highly recommend these lunches, especially after a song moved everyone to their feet swaying in sheer melodic happiness. That’s when I said, “I think I’m starting to understand what these Christian music people are looking for!”

But the real “Ah-ha moment” of my day was when I attended a talk called, Redefining Success. Here all insecurities were healed with a new vision for where I can go with my music starting right now. Was it all about winning a contest, fame and money? Or is making music more about celebrating community, and creating a quality product to be shared with people in small and simple ways. This I could do. I could be small and simple. I went home vowing to “do small things with great love,” as Mother Teresa said, and the inspiration just flowed from there.

Three quarters of a year have gone by since I attended IMMERSE and I have;

Am I famous? Am I BIG yet? Well, it depends on who you ask: World or God? If it’s God, I think I’m doing alright! Through my adventures in “being small with great love” this year I have improved my craft, created smiles and seen a few tears wiped away with a heartfelt lyric. I am so very glad for making the effort to go to IMMERSE.

May God bless you as you discern your commitment to this invitation and opportunity for growth.

This site uses Akismet to reduce spam. Learn how your comment data is processed.